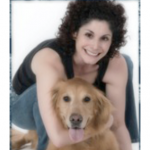 Madison and I first met Dr. Barb Royal the summer of 2003. Madison had been having trouble getting up from the floor at the age of 6yrs old. Our previous vet had taken x-rays of her hips and diagnosed that she had no hip dysplasia (but didn’t diagnose what the cause was) and prescribed daily doses of Rimadyl. I found this unacceptable and was searching for a better option. Plus, our previous vet was not open to my home feeding methods or holistic approach. I had heard that there was an acupuncturist working at Family Pet Animal Hospital and decided to book an appointment immediately.

Upon our first meeting with Dr. Royal I was impressed with not only her immense knowledge but her intense compassion, not only for Madison but for myself as well. She examined Madison on the floor instead of the table, which I immediately loved. And she took the time to really get to know both Madison and myself. We were not just a number or appointment in her book. Madison proceeded with 2-3 acupuncture sessions and had good results, but not good enough for Dr. Royal. At that point Dr. Royal decided to x-ray her knees as our previous vet hadnʼt thought to do that at the same time they did her hips. Sure enough both of Maddieʼs ACLʼs were torn or near tearing completely. Dr. Royal advised me on surgeons and helped lead me to get the best recovery for Maddie.

And boy did she. The surgery was tough, but Maddie was a trooper and was up and going in no time. The acupuncture which continued during her healing was a huge part of her successful recovery and allowed her to continue to lead the joyful, active lifestyle we both desired. Swimming, hiking and running after any squeaky toy could resume as if nothing had happened.

Then the spring of 2009 Madison broke her leg while playing at the dog park. She was in a cast for a few weeks and taking Rimadyl to help with the healing. After taking for a week our Primary vet wanted to run a blood panel to make sure that the Rimadyl was not causing any problems to her liver or kidneys. This was the first mark that something was wrong. Her liver enzymes were extremely high. We took her off the Rimadyl and retested a week later. Still elevated. Ran several other test could not find the cause.

After many tests and finally an ultrasound, it was discovered that Madison had a mass on her liver about (6-9cm). Needle biopsy at this point showed it was benign. However, surgeons advised removing it due to its location and size. Maddie went in for surgery and they were unable to remove the mass as there were too many blood vessels connected. And a larger biopsy now showed that this was a Heptocellular Carcinoma (CANCER). At this point the surgeons were recommending Chemo-embolization. Not much studies done on this treatment and at the age of 12 wasn’t sure I wanted to put Maddie through that. She had just been through a huge surgery and I just didn’t want to take any chances. I reached out to Dr. Royal again.

Dr. Royal looked over the history and notes from the surgeon. And devised a treatment plan to help slow down the growth of the mass and hopefully negate the cancer cells through diet and herbs.

This is more my style of treatment so I felt much more comfortable with this rather than injecting my beloved friend with toxins. Again, Dr. Royal turned a horrific diagnosis into something that was workable. We changed Maddieʼs diet slightly removing all carbs and high protein. Added some herbs and tinctures and resumed our acupuncture sessions. Dr. Royal, Madison and I kicked this highly deadly and fast growing cancer butt for a whole year. Maddie fought so hard and every time we entered Dr. Royalʼs office was always her energetic self. Searching for the treat jar, no matter where Dr. Royal had moved it. Even at our last appointment with Dr. Royal she commented on how “alert and energetic” she was. This was in large part due to the terrific care that we received from Dr. Royal and her staff. No one could have expected Maddie to live for a whole year with this terminal cancer diagnosis.

On August 9, 2010, Madison went into liver failure for the second time within 72 hours. Her little body just couldn’t fight anymore and I gave her the peace she so deserved. She was such a bright, energetic, sweet soul. I am honored that she shared her spirit with me for over 13 years.

Thank you Dr. Royal for your knowledge, dedication, and compassion. You allowed Madison to live a long, happy, and healthy life and beat all the odds.