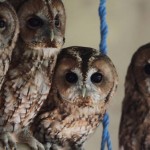 There is a personal fascination some of us have with owls.  It just so happens that Dr. Royal spotted an article in today’s New York Times that talks about the efforts of the Global Owl Project to catalog and share a wide variety of information all about owls, and you can read the whole article right here.

Speaking of owls, be sure to come by Madame ZuZu’s at 582 Roger Williams Avenue in Highland Park on Sunday, March 3rd from 1pm – 3pm for a presentation and book signing by Dr. Royal.  The first 3 people to mention owl feathers will get a free signed book from Dr. Royal!

20 years ago the wisdom of owls changed Dr. Royal’s life so included in today’s post is an excerpt from the chapter HOOT in “The Royal Treatment: A Natural Approach to Wildly Healthy Pets”, available in stores and online at amazon.com.

“We’d been hooting on and off for about two minutes when, as if by magic, we heard an answer. I was stunned at how quickly the reply had come.  We challenged him again, and he came in closer to explain his boundaries. A few more hoots and we could see his silhouette on a distant branch.

Diane quickly helped me put on the long leather falconer’s glove, and deftly handed me a mouse. With the mouse on my outstretched arm, it was presumed the owl would notice that dinner was served.

And notice he did.  Miraculously, the father owl silently appeared right above me in a nearby tree. I love how they do that; their wings make no noise. They have evolved a unique interlocking feather system that keeps their flight perfectly silent, even to mouse ears. I could see his dilemma. His head moved slightly left to right, as he eyed the mouse on my arm. Mouse, stranger, mouse, stranger. My breath stopped as the owl swooped down to perch on my hand. Holding perfectly still, I braced myself for impact, but was amazed at how imperceptible his landing was.

The owl wasted no time collecting his prize. With a spin of his agile head, he looked down, grabbed the mouse firmly with his toes and spread his wings.

Who knew that a wild Strix occidentalis caurina would accept take-out from a Chicagoan?

There was a millisecond after he took the mouse in his sharp talons—and before he took off noiselessly into the sky—when he cocked his head and looked me straight in the eye.  He was less than a foot away from my face. I half expected him to say, “Thanks, Barb.”  He was both completely wild and completely comfortable interacting with me.

I was riveted by his beauty. His round, brown head was spotted with white and framed at the top by a pronounced widow’s peak.  Many rows of feathers, circles inside circles, held two shiny black eyes slowly blinking.  His face was expressionless but full of intent.

There is a palpable difference between bird-watching and having a bird watch you.

As I was drawn into his gaze, I felt a connection with him, the thick forest around us, and everything in it. We were all on the same frequency as the earth.

I was pierced by how perfectly the owl fit into his environment. Looking directly into his eyes, I saw deep into the forest, acknowledging the profound relation between him and his food, his evolution, and our planet.  These elements should not, and could not, be separated from any animal. This moment was quiet and personal and somehow took me outside of myself.  It set in motion a change in me that I didn’t have time to contemplate then. I could only think about the gust of air under his wings as he took flight. The chase was on.”