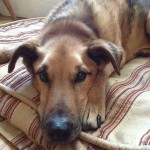 If your pets seem healthy and you are feeding them jerky STOP now throw the remaining jerky away.  This has been going on for many years it is NOT attributed to one bad batch. It seems relatively random which animals are affected and which jerky is causng it.

If your pets seem off such as eating less, vomiting, diarrhea, less active and you are feeding them Jerky take them to your vet and ask for blood work.

I very strongly believe that many of the non-communicable diseases that we are seeing in animals (cancers, thyroid disease, autoimmune diseases, kidney and liver disease, allergies, other hormonal imbalances and many others) can be linked to what we feed our pets.  Often what we feed our pets isn’t as healthy as the labels would like us to believe.  There are often “small amounts” of chemicals, carcinogens, toxins and irritants in many foods and treats.  And it is very difficult to find out about them.

When people say to me, “does it really matter, it’s such a small amount” I really have to laugh.  That’s what we said years ago about invisible radiation – how could it hurt you, you can’t even see it!  Or hormonal regulation — clearly a very tiny amount of estrogen makes a big difference for hormonal balance.  Inject just a minute drop of insulin and you have the difference between life and death.  And really, could splitting an atom really make any waves?  So I say, don’t worry about tiny amounts, by all means, tiny spores of fungus, itsy-bitsy resistant bacteria, they really are no threat, and one or two cancer cells ignored, definitely can’t be important.  The list of tiny-but-mighty goes on and on.
I would prefer that we didn’t add more to the list of tiny-but-deadly.
Specifically relating to the contaminants in these jerky treats, I know that we won’t know until we really get some samples and get the real data.

Until that time, there are many scenarios on the table (and in the jerky). And yes, as with many things, a tiny amount can certainly cause serious problems.

It is very easy to make your own dehydrated chicken (or other protein) jerky using the recipe included below.    If you do not own a food dehydrator, this recipe can be made in the oven.

Slice the meat along the grain into strips that measure about 1 inch thick by 3 inches long (may depend on protein).  Using a food dehydrator with temperature control, evenly space strips so they do not touch in the dehydrator and dry at 145 – 155 degrees for a least 4 to 6 hours.  Remove the jerky from the dehydrator and place the dried strips on a baking sheet, again not allowing the strips to touch or overlap.  Heat the strips in a pre-heated 275 degree oven for 10 minutes until the internal temperature reached 160 degrees.  Remove the strips from the oven, allow to cool, then transfer to an airtight container where it can keep for 1 to 2 months.